Eradicating poverty and inequality to save our planet: the change starts with me

Eradicating poverty and inequality to save our planet: the change starts with me 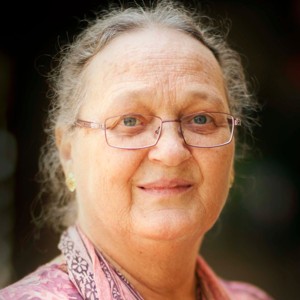 Anne Perry was born in Essex, England in 1947 and has been residing in India for almost 60 years and is currently an Indian citizen. At the age of 16, as part of an adventurous journey by car with her family, she arrived in India, where she completed her studies and started working as a journalist in Mumbai. She met Vicente Ferrer during an interview in 1968 and got stirred by his philosophy and work for the disadvantaged communities in Manmad, Maharashtra. Bound by a shared commitment to fight for the equality and rights of such communities, Anne joined Vicente in Anantapur and founded the Rural Development Trust (RDT) in 1969. A year later, they got married.

As a co-founder of RDT, young Anne Ferrer started spearheading the interventions during the 1970s when the conditions in the Anantapur district were severe and drought consequences included extreme poverty, malnutrition, illiteracy and worsening health conditions.

She designed and implemented programmes with a focus on children, women and persons with disabilities as well as in community health and hospitals. Ms. Ferrer has also been actively involved in interventions in ecology, livelihoods and habitat.

With 50 years of experience in field of development, she applies her expertise to not only upscale existing programmes but also to initiate other sustainable and innovative projects.

Amongst several accolades, Anne Ferrer is the recipient of the Jamnalal Bajaj 2015 award for the development of women and children and the Hamsa Award 2015 by the Andhra Pradesh Government. Internationally, she has received Knight Commander of the Order of the Civil Merit granted by the Ministry of External Affairs of Spain in 2014 and the Robert Burns Humanitarian Award (Scotland) in 2018.