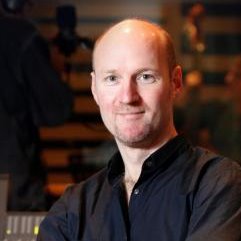 Donald Shaw is an acclaimed Scottish musician, producer, festival director and award-winning composer. He has recorded and collaborated on over 100 albums with musicians in all styles of music, created Bafta winning soundtracks and directed large-scale live commissions. His compositions have been performed by the BBC London Philharmonic, the Halle Orchestra, BBC Scottish Symphony Orchestra, Royal Scottish National Orchestra and Scottish Chamber Orchestra.

He has toured worldwide with Capercaillie – the Scots folk band he co-founded whilst at school in Argyll – who have gone on to sell over a million albums with their unique sound of Gaelic songs & contemporary soundscapes.

He is currently principal Creative Producer for Glasgow’s Celtic Connections; the largest roots festival of it’s kind in the UK, with an annual audience of over 120,000.