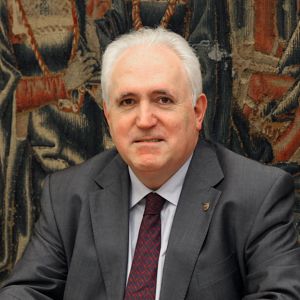 Jose María Guibert was born in Azpeitia (Gipuzkoa), in 1962. He is the rector of the University of Deusto and a professor in the Faculty of Engineering.
He has been a member of the Society of Jesus since 1982 and was ordained a priest in 1993.
As for his academic formation, he was trained as an Industrial Engineer (1989) at the University of Navarra. He also holds a doctorate in Industrial Engineering (1996) from the University of the Basque Country (UPV). He also holds a degree in Ecclesiastical Studies (1992) from the University of Deusto. He then studied a degree in Theology (1994), at the Jesuit School of Theology at Berkeley, USA.
Later, he studied a Master in Business Administration in Higher Education Management (2010) at the Institute of Education at the University of London.
Guibert is the author of numerous publications in the areas of engineering, corporate social responsibility, leadership and professional ethics. An example of this is his latest work, Diccionario de liderazgo ignaciano. He also holds various senior positions at the University of Deusto. He is Vice-Rector for the Donostia-San Sebastián Campus, Rector's Delegate for Mission Development, Member of the Board of Trustees of the Deusto Foundation, Director of the Department of Industrial Technologies and Director of the Centre for Applied Ethics.