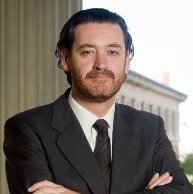 Miguel Zugaza Miranda graduated in Art History from the Complutense University of Madrid in 1987, later continuing his studies at the same institution. His professional career began in 1986 with the management of the cultural services company Ikeder, a position he held until 1994, when he joined the Deputy Directorate General of the Reina Sofia Museum, where he remained until 1996, and from 1996 to 2002 he held the position of Director of the Bilbao Fine Arts Museum, in whose remodeling and programming of activities he played an active role. In January 2002 he was appointed director of the Museo Nacional del Prado, a position he held until November 30, 2016.

This Museum integrates the primitive Museo de Bellas Artes de Bilbao founded in 1908 and the Museo de Arte Moderno, inaugurated in 1924. Characterized by its chronological breadth and the diversity of the artistic manifestations it contains, the collection of the Bilbao Fine Arts Museum currently includes, among paintings, sculptures, drawings, engravings and decorative arts, more than 6,000 works, with a chronology that expands from the twelfth century to the present day.