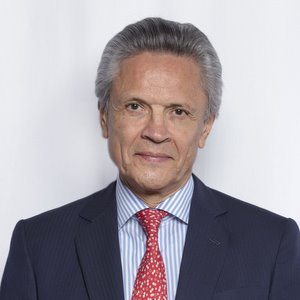 Master in Spanish Literature from the University of Guanajuato, Mexico. Director and Master of Theater. He has directed more than 30 plays, of classic and contemporary authors. For more than 40 years he has combined artistic work with cultural management and promotion. Founder and Director of the Festival Iberoamericano de Teatro de Bogotá and the Festival Internacional de Teatro de San José por la Paz, Costa Rica. He was Director of the Festival Sevilla entre Culturas, the Gran Festival Ciudad de México and the Festival Internacional Cervantino de Guanajuato, among other international festivals.

In the last three decades he has held the following public responsibilities in Colombia: General Director of the Colombian Institute of Culture, Ambassador of Colombia in Mexico, Advisor to the President of the Republic for the General Law of Culture and Minister of Culture. Between 2006 and 2009 he was the Director of Culture of the Ibero-American General Secretariat in Madrid and promoted the creation of the Iberescena, Iberorquestas Juveniles and Ibermuseos programs. Since 2010 he has been the General Director of the Teatro Mayor Julio Mario Santo Domingo in Bogota.

The Teatro Mayor has a seating capacity of 1,303 and was built to offer all types of opera and musicals, concerts, classical ballet, contemporary dance and plays. From the interest of the Teatro Mayor and Bancolombia to democratize culture comes Teatro Digital, a stage of the Mayor's Office of Bogota through the District Institute of the Arts that broadcasts a new show every Thursday. It promotes inclusion and access to the artistic offerings of the theater by diverse populations in terms of age, socioeconomic conditions and geographic location, using digital platforms and social networks as tools for the transmission and dissemination of culture. Since its creation in 2015, it has benefited people from more than 16 departments of Colombia and its transmissions have been seen by more than 12 million users between social networks and the portal www.teatrodigital.org.