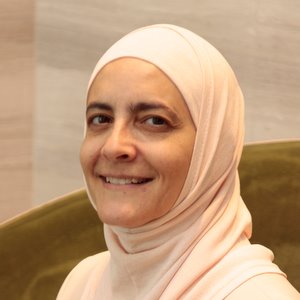 Professor of molecular cell biology at the Hashemite University of Jordan, Harvard Radcliff Fellow, Fulbright Scholar, Eisenhower Fellow, visiting professor at Yale and Cambridge. World expert on the genetics of Circassian and Chechen populations in Jordan. Established stem cell research ethics law in Jordan. Advocate for biological evolution and Islam, researches young refugees and the epigenetics of trauma across generations. Member of the advisory board of UN Women in Jordan.

Established a network of women mentors, received the Partnerships for enhanced engagement in research (PEER) 2014 award. Organized the first gender summit for the Arab world in 2017. She is one of the most influential women scientists in the Islamic world, 12 among the 100 most influential Arab women, Global Changemaker Award, President of the Society for the Advancement of Science, Technology and Innovation in the Arab World. Awarded the Jordanian Star of Science by His Majesty King Abdullah II.

Developer of the "We Love Reading" project, which inspires children to read for pleasure through its research-supported reading program, training local volunteers to read to children in their neighborhoods. Changing mindsets through reading to create agents of change.
Author of the book: Five scarves, Doing the impossible: If we can reverse cell fate why cant we redefine success, Nova Publisher 2018. Reviewed by Nature