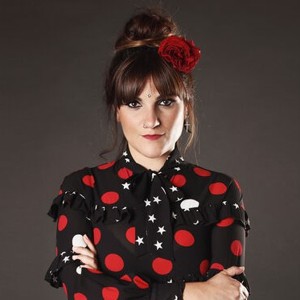 Rozalén is one of the main voices of the Spanish author's song. With three works produced by Ismael Guijarro, she has captivated audiences and critics alike. She has accumulated such important distinctions as two Platinum and one Gold Albums, the Castilla-La Mancha Professional Merit Plaque and the recognition of Album of the Year 2015 by Apple Music. In recent months, she has been a judge of the prestigious Spanish Ortega y Gasset Journalism Awards and one of the most successful artists in the live world, gathering thousands of fans in each of her concerts. This summer she has performed at the main music festivals in the country in front of thousands of fans: Arenal Sound (2/08), Juergas Rock (4/08), Sonorama (9/08), Porta Ferrada (13/08), Rabolagartija (17/08), Starlite (24/08), Concert Music (25/08), among others.

She is also an important social activist, defending the rights of minorities and disadvantaged communities through her music. On stage, she is always accompanied by Beatriz Romero, a sign language interpreter. In this way, she defends an inclusive show aimed at everyone.

In September 2017, Rozalén presented 'Cuando el río suena...', an album preceded by the song 'Girasoles' and which reached #1 on the Spanish sales list. It is currently a Platinum record and has two Latin Grammy nominations: 'Best record of the year' and 'Best song of the year', for 'La Puerta Violeta', the second single from the same album. The artist is currently touring Spain and a large part of Latin America.