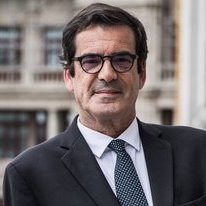 Rui Moreira is the Mayor of the city of Porto (Portugal) since 2013. His election sparked the interest of media worldwide, as he was the first independent candidate to be elected in a major European city, drawing a wave of support from a movement of citizens across the political spectrum.

He was re-elected in October 2017 for a new four years term.
Prior to that, he was a successful entrepreneur and investor with interests in different sectors, from transports and shipping to agroindustry and finance.

He is an opinion leader in Portugal and an influential voice on different areas. As a columnist and commentator in different TV channels and newspapers, he has been a leading advocate of the interests of the city of Porto and of the North of Portugal. He is the author of various books on economic, political and other contemporary issues – never shying away from controversy and from an informed and staunch defense of the values and principles he believes in.

From 2001 to 2013 he was the President of the Commercial Association of Porto, the oldest and one of the most prestigious entrepreneurial organizations in Portugal. He also served in several boards and advisory bodies in private companies, universities and in numerous cultural, social, and trade-related non-profit organizations. He is a regular speaker at international conferences and events.

Porto is the second most populated city in Portugal, after Lisbon. Surrounding the central core of the city of Porto are the Greater Porto sub-region and, more broadly, the Porto Metropolitan Area.  Apart from having a handful of large performance halls, which are the scene of numerous cultural and artistic events, the city of Porto has more than 30 museums - from those housing collections full of history to those with valuable collections of contemporary art - and dozens of monumental churches.