From the Can to the Drum

From the Can to the Drum 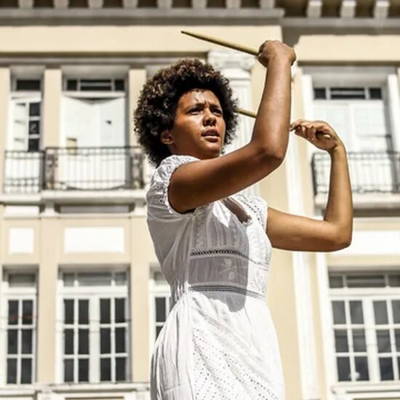 Elisete Jesus Silva, artistically known as Elem Silva, is 24 years old and was born in São Paulo, in the neighborhood of Tatuapé, in the east zone. When she was 3 months old, her mother Nilzete Silva went to Salvador, Bahia, where she has lived until today. At the age of 8, with the help of his mother, she created a band called Children of Rocinha (favela) in Pelourinho. She started playing with recycled cans, buckets and bottles and, with the help of tourists, later bought leather instruments for the band. At the age of 17, he made his first international trip to London with a delegation of artists to participate and perform at the South Bank Centre festival.
The Banda Meninos da Rocinha do Pelô is a band of 40 percussionists led by three "maestrinos" and one "maestrina", Elem da Silva, creator of the group and protagonist of the documentary "Maestrina da Favela".